Utility Companies Defy Speed of Light by placing Capacitors on the Trans...

Who Killed the Electric Car?

Posted by Vinyasi at 3:35 PM No comments:

Promoting Surge Mentality Among Scientists and, Most Importantly, Among Electrical Engineers

For the glorification of Eric's LMD analog computer, I submit to you that Paul Falstad's Electronic Simulator – as compared to his original simulator operating in Java and LTSpice from Linear Technologies – do no harm in exhibiting Delta to its maximum potential. It is only through a few months of practice upon Paul's simulator that I have come to develop an assortment of circuits which exhibit the Δ Delta function as a negative resistance. It is this very specific type of change applied to the output of a circuit that any possibility can be imagined: rapid escalation (loaded into blank canvas), semi-rapid deescalation, very slow escalation exhibiting the properties of an apparent 'plateau', and best of all: periodic resonant oscillations of the magnification of input such that its output is far greater than its input. Excluded from this study of mine are conventional 'tank' circuits whose outputs are either periodic with diminishing returns (such as an LRC circuit), or stable outputs which are less than their inputs (such as: the Hartley oscillator). This may fly in the face of conventional wisdom, but it is a fact of life that all things are possible – especially when we consider the infinite range of change, itself.

It is the nature of change, in general, that there are no rules violating change to prevent change from occurring. All forms of change are possible. Hence, all manifestations are possible. Thus, on the basis of this simple logic is my study of electrical surges made possible resulting in more energy supplied to a load than is supplied by one or more combined sources. This is a precondition for my study not meant to exclude the existence of any other option. I merely don't focus on the other possibilities that don't exhibit negative resistance.

It doesn't take much logic to validate my chosen theme without ever resorting to experimentation to prove it. Nor is it necessary to resort to fancy or mayhem when a very orderly discussion will do just fine.

We take the field of infinity. It is ambiguous how much or how little is contained within this realm, because it would be absurd to quantify infinity in measurable terms. And we know that if any trend should pursue infinity, then it gradually takes on more and more of the characteristics of infinity – in its own limited way – without having to become absolutely infinite, itself. And if it should go too far in this pursuit, then Mother Nature gives it a good-sized slap in its face to destroy any chance of pursuing infinity in this manner any further by destroying any device or circuit which attempts to surge its output to ridiculously huge levels of achievement. In other words, the circuit will suffer a meltdown among its coils and consequently short them out, or else blow up its batteries, capacitors, or transistors, etc.

So, there is no risk of this study of mine "getting out of hand", for Mother Nature takes care of it.

This surge towards infinity is mathematically modeled upon the principle of divergence in general and divergent series in particular, such as the harmonic series summation of:


... which has infinity as its limit.

Another method of validating my study is to plot the output of my circuits – not using amperage and/or voltage over time, but instead – using amperage plotted against voltage. The result is a graph not unlike that of a simple circuit involving a spark gap configured to behave as a neon bulb, or else an op amp circuit configured to behave similarly, creating a loop-shape on the oscilloscope indicating at least one threshold is reached. In the case of a tunnel diode, it's a matter of rapidly charging or discharging voltage as its amperage gradually ascends or descends on the oscilloscope. But for a spark gap, such as a neon bulb, the situation inverts so that the amperage quickly alters in response to a gradual change in voltage. These examples exhibit the behavior of negative resistance. So, my circuits satisfy this criteria whenever they come close to this loopy graphic shape even if their loops don't fully close. It's not their closure which indicates negative resistance, but their sudden shifting along one of their graph's amperage versus voltage axes which is the tell-tale sign of negative resistance. One of my free energy circuits has a stellated output on its capacitor, like the five-pointed pentagram, while a piece of wire in this same circuit draws open-faced isosceles triangles.

We all know how important mathematical modeling is to survey work, construction work, and so forth. We take it for granted how accurate these pursuits are and how relevant they are without giving it a second thought.

How stupid it is to disregard the magnification of energy simply because most everyone we know believes the same way and our 'authority figures' keep repeating this same mantra over and over and over again until we're convinced that it must be so.

Yet, it is these very same equations, used by any electronic simulator, which are capable of just as readily producing an output which is greater than their input if these simulators do not also suffer from the additional straitjacket of disallowing the growth of surges to the point of suppressing their diverging numerical answers.


Paul Falstad's JavaScript simulator does not suffer from suppression of divergent tendencies. Both the opportunity for overunity as well as the opportunity for conventional adherence is available in this implementation of Paul's simulator. This is the beauty of fuzzy electronic simulation devoid of 'policy' set down by anyone. Just follow the guidance of mathematical modeling and avoid the politics.
Posted by Vinyasi at 8:51 PM No comments:

I'm convinced through months of tinkering with my simulated derivation of Eric's analog computer in Longitudinal Magneto-Dielectric mode that TMT is equivalent to the LMD and to lightning. And this is all because of phase conjugation: the ability to reassemble a wave back together again, do we get a duality of opposite perspectives from within each wave of electricity zipping around inside of my simulation -- the daughter waves see their parent wave one way and their parent wave sees her daughter waves the opposite way and they're both right creating an increase of both duration of longevity and an increase of quantity of energy amounting to a reformulation of Einstein's Energy equals Mass times the speed of light squared into simply Energy equals Time. Duality of opposition constitutes divergence with the consequence of discontinuity which are factors making up phase conjugation ... 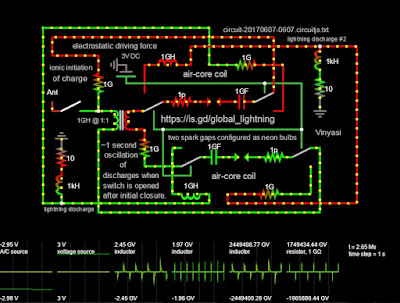 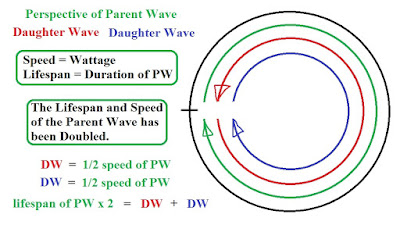 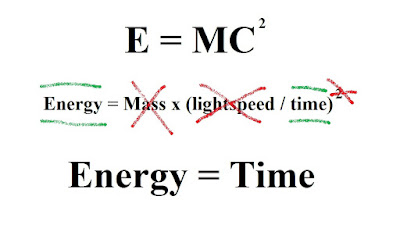 Posted by Vinyasi at 5:13 AM No comments: